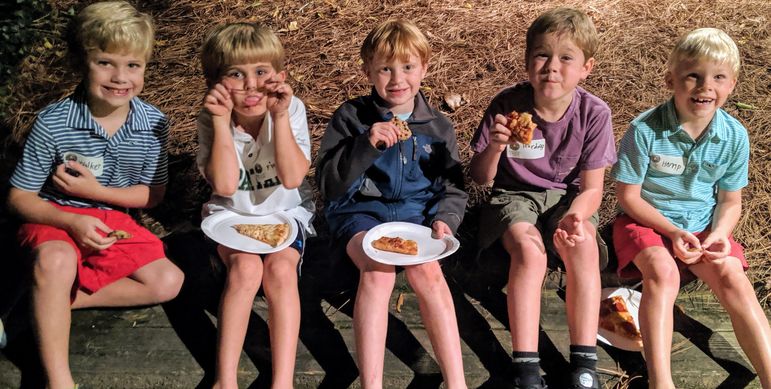 It was a great evening in Birmingham on Monday!

Week 3 of our Camp Reunions and Movie Shows was another great one! This week, we were able to visit Birmingham, Nashville, and Atlanta. On Monday (October 28th), we were in Birmingham, Alabama to kick things off. The Welden family were great hosts, and we are very grateful to Amanda and Joseph Welden for having us in their home, as well as their three boys who were a great help to Yates with setting everything up. 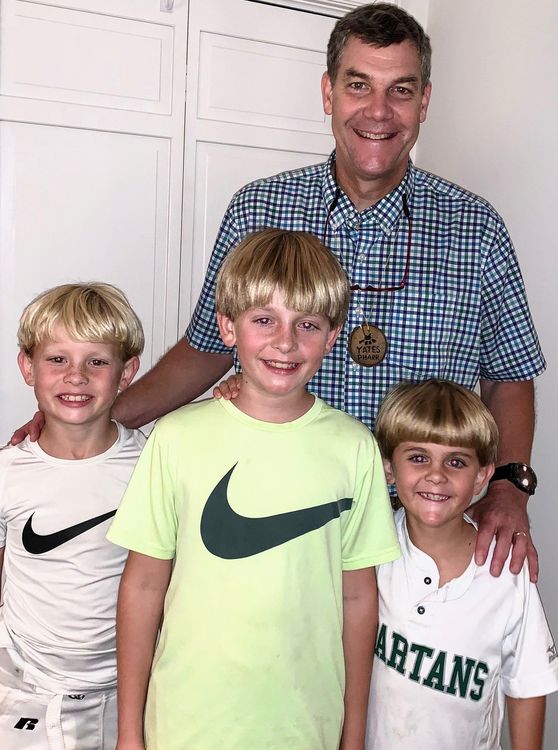 The three Welden boys were a great help on Monday as their family hosted everyone in their home tonight.

5- Year campers Ward and Ellis catching up over pizza

The boys enjoyed eating pizza and playing some football in the back yard before we watched the updated camp movie.

We got to see some veteran campers in Birmingham, including 5-year campers Ward and Ellis, who enjoyed catching up over pizza. We were also happy to reconnect with some Falling Creek Alumni, including Lawrence Whatley, Richard Whitaker, & Joseph Welden, whose boys are now coming to camp to carry on the tradition. It’s so fun to see the camp experience come full circle when sons of alumni are able to join us back at camp. Earlier in the day, Yates was also able to meet up with Dusty Davis, camp’s Chaplain and rock climbing extraordinaire, as well as Lucy Pharr, one of Yates and Marisa’s daughters who is a Senior at Samford University. 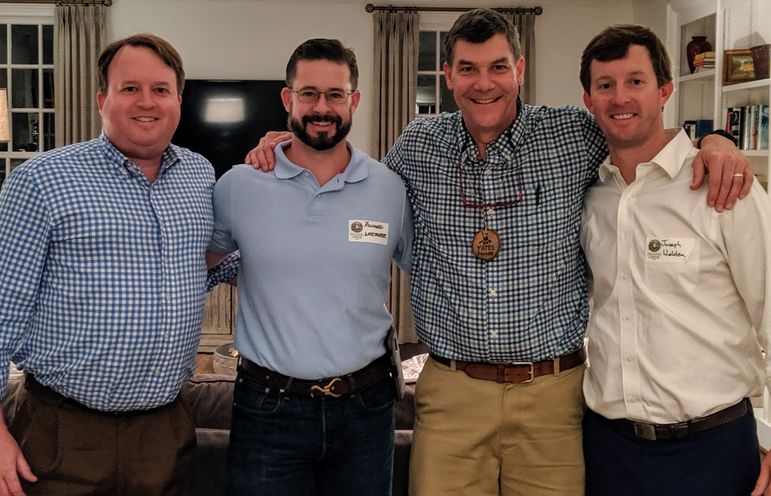 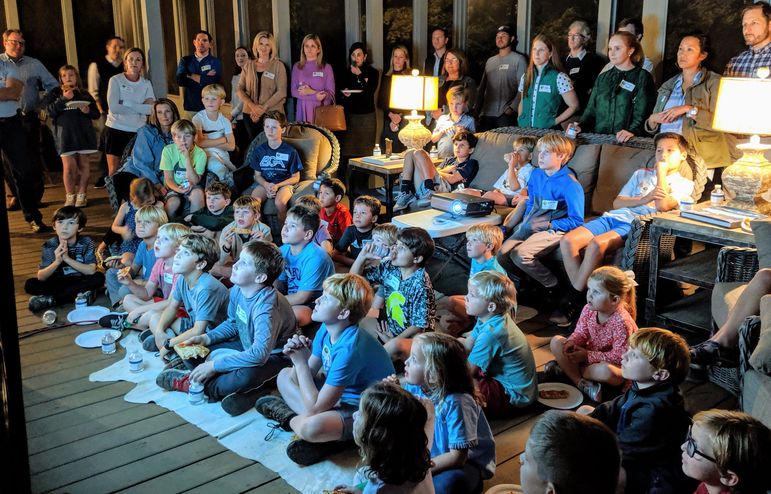 Watching the camp movie in the Welden’s Birmingham home

The next day on Tuesday (October 29), we headed to Nashville, Tennessee for another fun evening. Cory and Brent Savoie joined with Shae and Jim Uden to host the Nashville area Falling Creek Camp Movies & Reunion at the Uden’s home. Before we gathered to enjoy the camp movie, Shae Uden and Cory Savoie offered some delicious dessert that, not surprisingly, disappeared when the boys arrived. 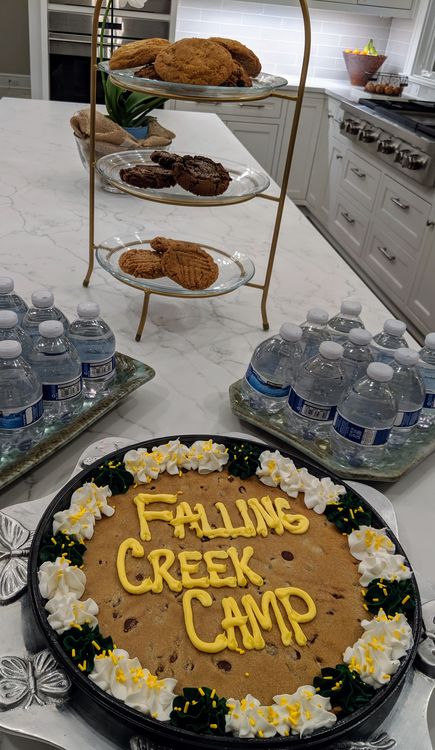 Shae Uden and Cory Savoie offered some delicious dessert that, not surprisingly, disappeared when the boys arrived. 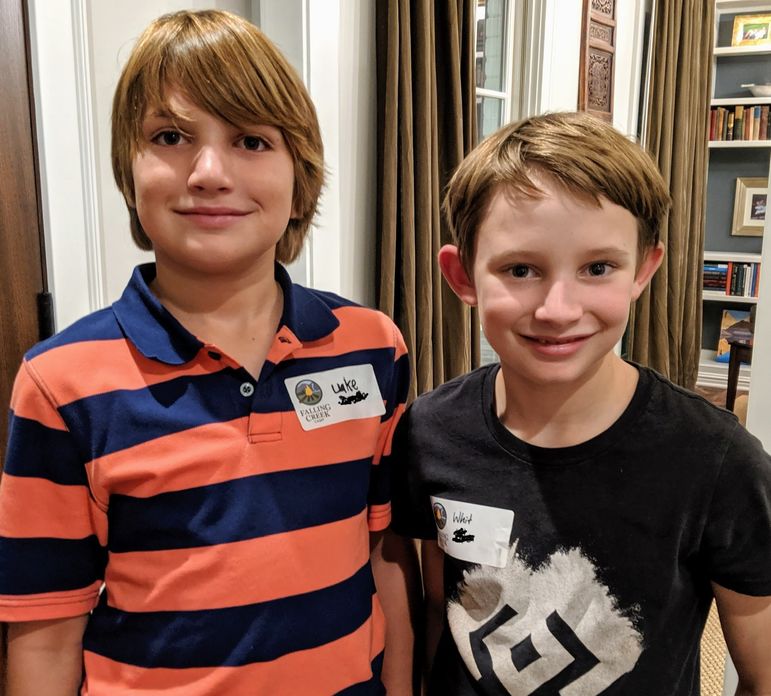 Whit and Luke are planning to return to FCC this coming summer and both will continue to grow their interest in rock climbing.

We were fortunate to have several alumni come out, including Breaux Tubbs, Will Weaver, Carter Paine, and Jim Uden. Breaux is an 8 year FCC veteran (5 as a camper and 3 as a counselor), prior Tribal Leader, and head of the Tennis program. Breaux is originally from New Orleans, but is now working in Nashville in the insurance business. Will was a 7-year camper from Nashville, and is currently a Sophomore at Vanderbilt. His father is also a Falling Creek alum. Will was a staff member last summer, and we are thrilled that he is planning to return for his 9th year in 2020 to teach tennis again! Carter was a camper in 1987 and was excited to introduce FCC to his son tonight. Jim Uden, also a Nashville native, was a camper in 1986-88 when Yates was a counselor, and he then returned in the 90’s as a counselor. His son is returning to camp this summer, eager to continue his growing interest in rock climbing and the adventure activities. 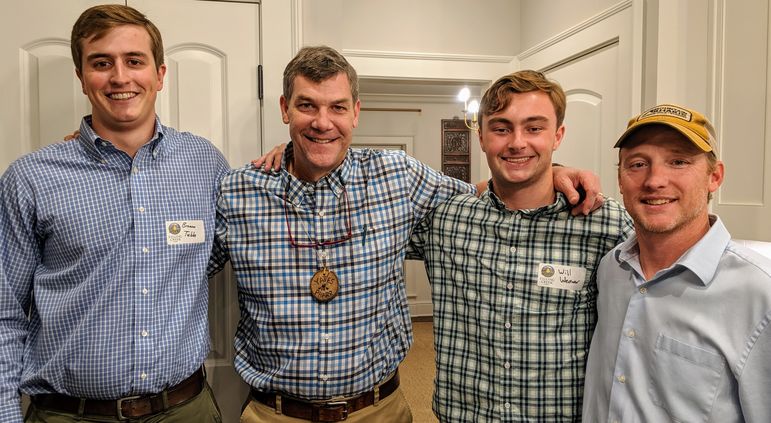 Falling Creek alumni, staff, and dads who have attended father/son weekend, joined the boys in a group photo in Nashville.

The travel week concluded with a visit to Atlanta on Wednesday (October 30). Chris and Carol Daniel were fantastic hosts, and we had a great turn-out. It was so much fun for the boys to reconnect with several superstar staff and alumni who made the time to join us! Harry O, Parker Moon, Zachary Rivera, Stephanie and Andrew Maddox, Matty McHugh, and KD Lemons, were all in attendance. 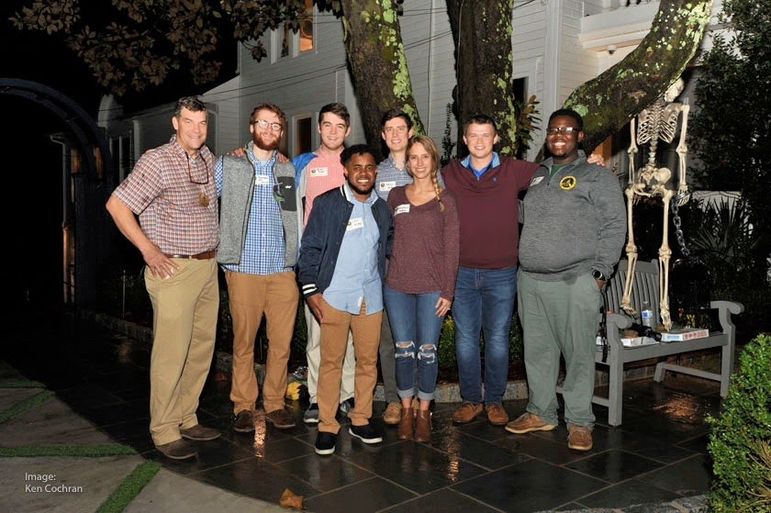 It was so much fun for the boys to reconnect with these superstar staff and alumni tonight. Thanks to alumnus, Ken Cochran for the photo. (l to r) Harry O, Parker Moon, Zachary Rivera, Stephanie and Andrew Maddox, Matty McHugh, and KD Lemons 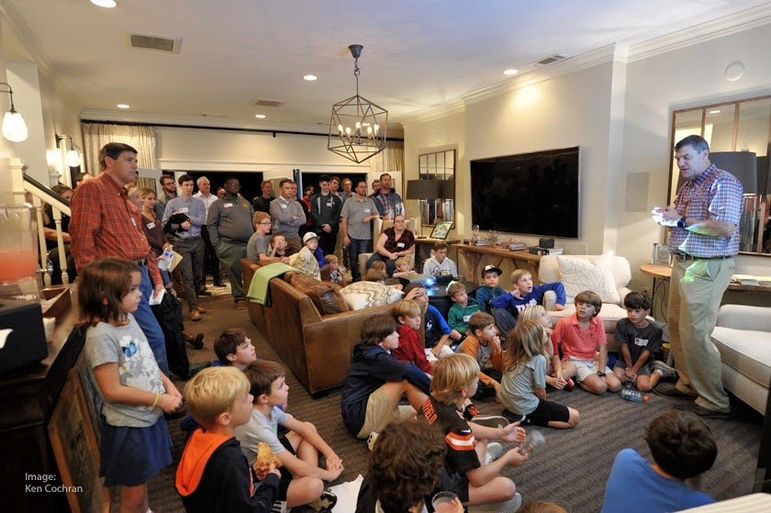 FCC alumnus, Ken Cochran, took some great photos throughout the evening in Atlanta.

We were pleased to have Ken Cochran, an alumni who served as a photographer in the late 80’s at FCC, come and offer his expert photography skills, capturing several of the photos posted. We had a great time catching up with Chris Daniel, an FCC Alumni, and his son, who will be returning to FCC in 2020 for his 7th summer. Handly Cameron and his son, were also at the event, and we’re excited to have his son returning for his 8th summer at FCC! 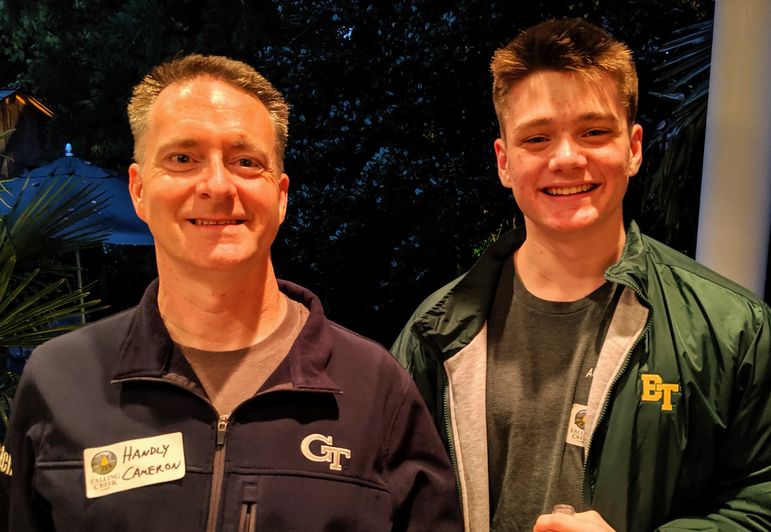 Handly Cameron and his son, who will be returning for his 8th summer at FCC. 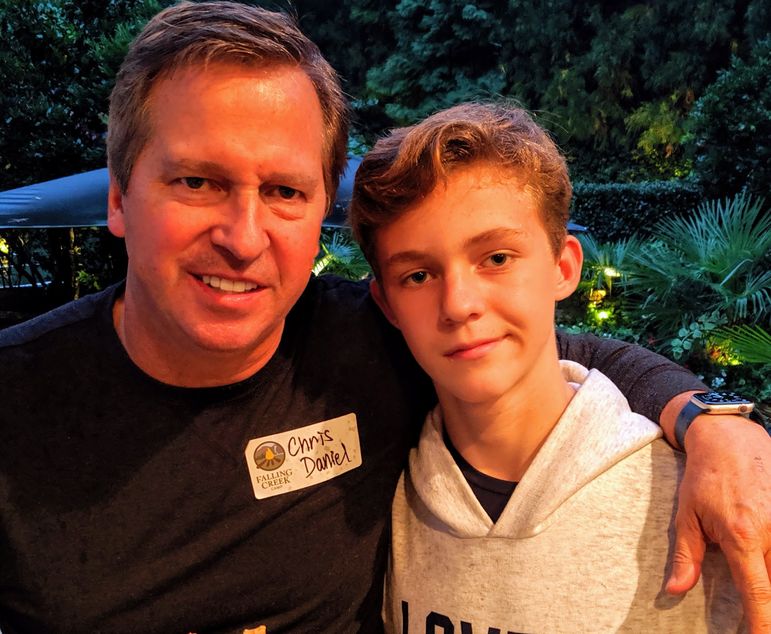 Chris Daniel and his son, who will be returning to FCC in 2020 for his 7th summer. 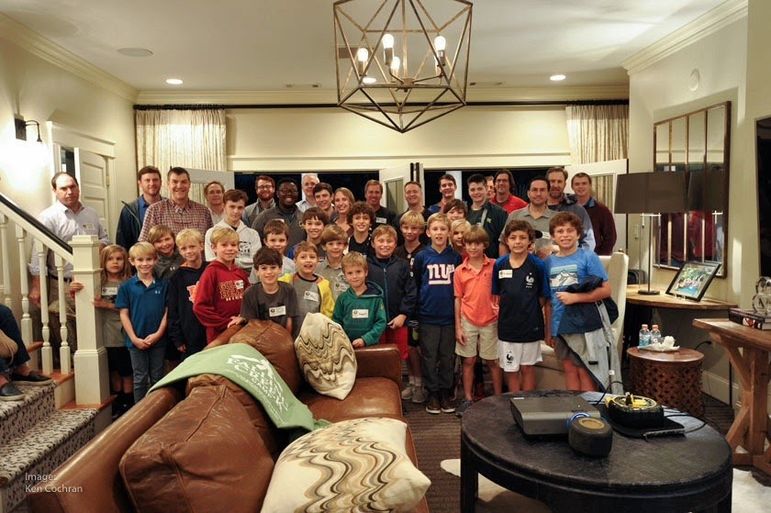 We were thrilled that there were a large group of alumni, staff, and dads who have attended Father/Son Weekend on Wednesday in Atlanta that joined the boys for a big group photo. Thanks to alumnus Ken Cochran for this photo.

Next week we’ll be rounding out our Camp Reunions and Movie Shows with the final week of travel on the calendar. On Monday (November 4), we’ll be in Houston, Texas! Then on Wednesday, we’ll finish our travel season in Asheville, North Carolina. If we didn’t make it to your hometown this year, don’t worry! We’ll be live-streaming the Asheville show on both Facebook and Instagram, starting at 6:30pm EST. We’d love to have you tune in, and you can comment on the feed to get one of our 2020 collectable trunk stickers! Just give us a call for more details on either event next week – we can’t wait to see you soon.

Camp friends are the best friends!