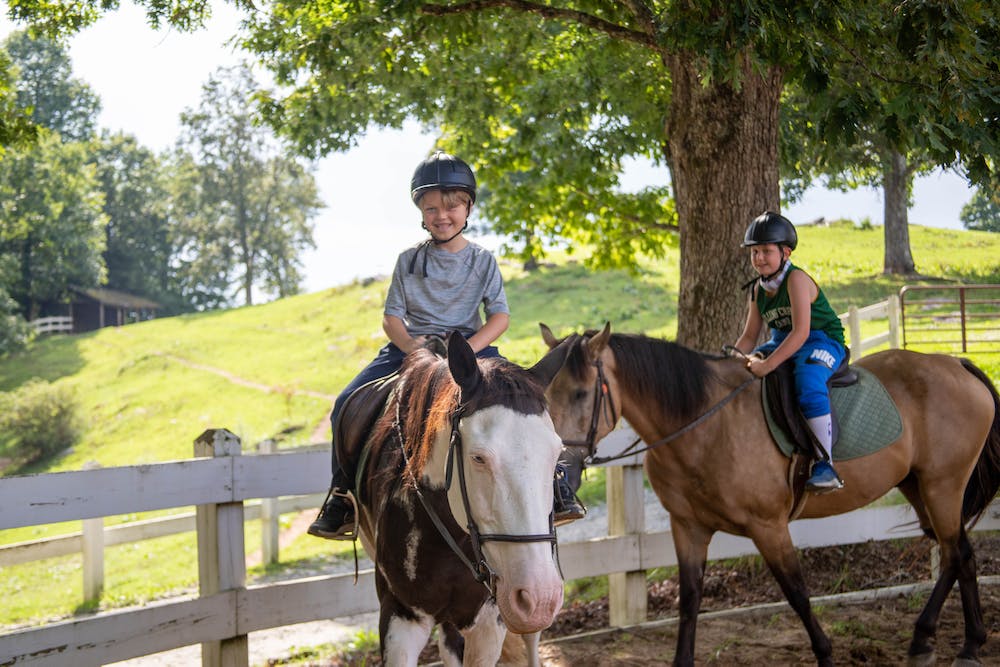 Registration for the 2023 Camp Season is open!

If you are new to Falling Creek and would like more information or to schedule a tour of camp, please call the camp office at 828-692-0262.

With long waiting lists certain, we encourage interested families to review our session options and submit an application as soon as possible.

Guaranteed Priority: 2022 returning June, Main, 2-Week, and Junior Camp campers are guaranteed a spot in the same session if age/grade requirements are met, is in good standing, and the application and deposit are received by September 15th.

All other applications received before September 15th will be held in the order received to await processing beginning on September 16th based on the priorities listed below. You will be notified of your enrollment status the week after the priority deadline.

Second Priority: Applications from brothers of current campers, former campers, sons and nephews of alumni, and campers previously on the wait list, received by September 15th, will have second priority for enrollment. (Priority is not given to families who have attended a Father/Son Weekend or Family Camp).

Other Applicants: New camper applications received before September 15th will be processed in the order received and enrolled as space allows beginning September 16th.

Applications received after the priority enrollment period will be processed in the order received. Applicants will be enrolled as space allows or placed on a wait list according to our wait list policy.

Campers are grouped in cabins based on current grade in school.

To ensure geographic diversity, in rare situations, enrollment may be limited from certain cities.

No more than two campers from the same hometown will be placed in a cabin.

Priority for Family Camp is given to returning families for one week after the application is made available. After that, applications are accepted on a first-come-first-served basis until the session reaches capacity. Then applications are placed on a wait list.

If we receive your application after we have reached capacity, you will be notified that your camper has been placed on our waiting list and the deposit may not be processed until your camper is enrolled in a session. The date the application is received, any applicable enrollment priority, and the camper’s grade will determine wait list position.

For up to date session availability, please contact our camp office.

We anticipate cancellations each year, so we will be able to enroll some boys from our waiting lists. Since waiting list boys receive second priority enrollment the following year, we advise you to submit an application and remain on our waiting list even if chances seem slim.

The $1,000 deposit and Father/Son tuition is accepted via eCheck, Debit Card, or Credit Card during the application process for each applied session. Checks also may be sent to camp. (If mailing a Check, or if your electronic payment fails, your application may not be considered complete until we receive your deposit.)

If your camper is eligible to be enrolled, the camp session deposit and Father/Son tuition will be processed upon enrollment.

If your application is being held until September 15th, the deposit will not be processed until your camper is enrolled in a session.

All deposits and any tuition paid is fully refundable until January 1.

The remaining tuition is split into two installments, half due by December 1 and half by April 1. Payments must be timely in order to maintain your son’s enrollment. You may pay in full at any earlier time.

If applying for a Father/Son Weekend, the tuition (plus any additional son tuition) is due with the application.

If you wish to protect your investment in the camp tuition, we suggest looking into trip insurance. One option is coverage through Travmark’s Activity Coverage plan in partnership with Battleface. This is a third-party provider, and the travel protection benefits can include trip cancellation, trip interruption, travel medical expense, emergency dental, and more. If interested in Cancel For Any Reason coverage, it must be purchased before your final tuition payment. To learn more or to get a quote, follow this link to Travmark’s Activity Coverage plan. Be sure to review the coverage details and answers to commonly asked questions before you make a purchase. Questions can be answered by contacting the program administrator Battleface 855-434-9387 and referencing the Travmark Activity Coverage plan.

If this insurance plan is not available in your state (CA, CT, NY, WA residents), or if you want more options, these are two other resources: American Camp Association or Everything Summer Camp.

We all don’t know how you all do it! Every session, whether it is Main Camp or Father/Son Weekend, we go into it saying, how can the last visit be topped? And each year, you do it!

What to know when completing the Camper Application.