There is something about snakes that fascinates little boys. It doesn’t seem to matter the creature – creepy, crawly, furry, scaley, etc. – our campers love them all, but especially snakes. Because of boys’ tendency to poke around in the woods and catch critters, it is even more important that they are educated on the snakes we have in this area. Boys need to know the risks of snakes, not necessarily because they should be afraid of them, but because they need to know how to identify them and behave around them. During this morning’s “snake program,” Steve Longenecker (SFL), educated boys on how to identify snakes and maintain a respectful distance away from them, but he also instilled a sense of wonder and awe for these creatures in the boys’ hearts. Nearly 100 boys chose to come to his program, the most of any session this year! 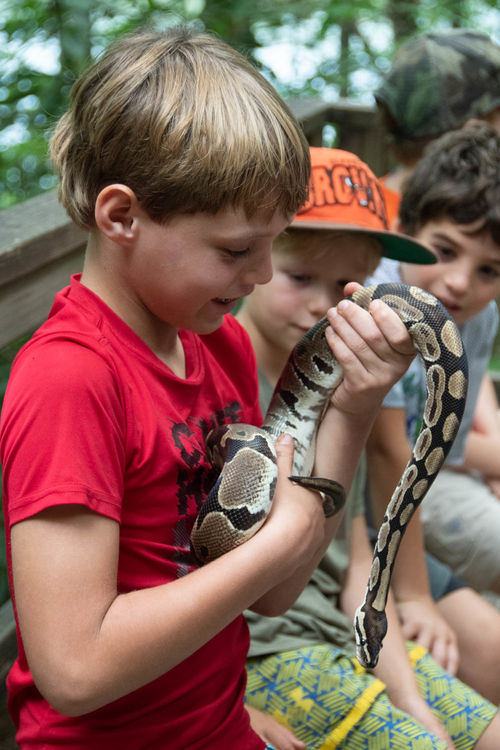 One of our boa constrictors that lives at the Nature Hut, named “Hulk”

SFL has been part of Falling Creek community since 1975, consistently educating boys in wilderness emergency medical aid (WEMA), leading climbing trips, hosting snake and falconry programs with his birds of prey and snakes, and even teaching how to cook his famous fried dough “Longenecker Lumps.” Today’s education opportunity was his snake program, where SFL teaches boys about native venomous and non venomous snakes in the area. He cares for two copperheads and a rattlesnake, both native to this area, as well as a huge boa constrictor named Hercules. SFL’s goal is to share his knowledge about snakes with these boys, ensuring that they are informed and have an accurate understanding of these creatures. Once the boys are more informed, they can appreciate and respect snakes for the impressive animals that they are, rather than just being terrified of them or thinking they are inherently bad. They will also be more educated on what to do if they ever encounter a snake on the trail, and know not to pick it up or play with it. He leaves his legacy by instilling a sense of wonder in the boys, and sharing his love for the animals that surround us, all while educating and dispelling myths or misunderstandings.

One common misunderstanding that SFL clarifies, is the thought that we have native poisonous snakes. If a snake was poisonous, it would harm us if we bit it, but rather we have venomous snakes which could cause harm if they bit us. The two venomous snakes we have in this area are rattlesnakes and copperheads, and SFL brought each so the boys could have a chance to see what they looked like. All the boys were captivated during the presentation, marveling at the snakes as SFL spoke. SFL told us about how snakes hunt by sensing heat through the pits on their head and smelling with their tongue. To demonstrate, the boys watched intently as the copperhead struck a hot water balloon, sensing it’s warmth, but was completely uninterested by the cold water ballon. “Whoa!” The crowd exclaimed at once, impressed by the strike and the two streams of water that sprayed out from where the fangs punctured. The boys were fascinated when SFL pulled out a rat to feed to Hercules, and they all watched the boa use his tongue to taste the particles and “smell” the rat in the air, take a bite, and dislocate his jaw to swallow him whole. Hercules eats once every two weeks, and this rat would take him a whole week to fully digest. 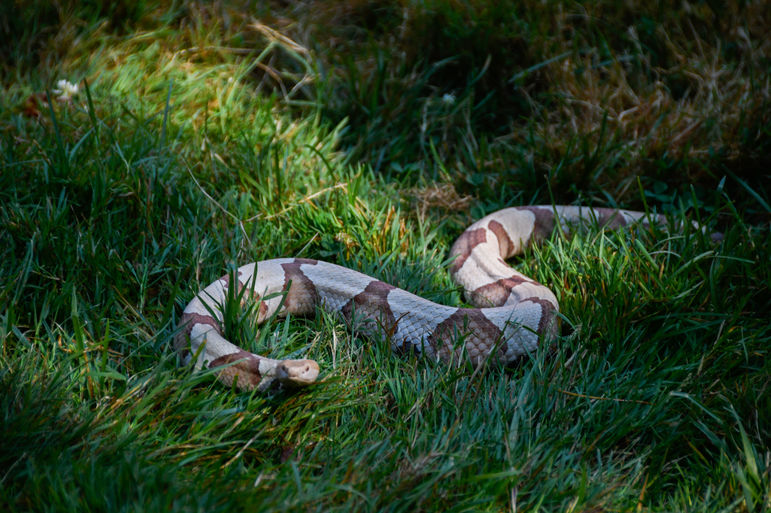 Charlie the Copperhead, under careful watch of SFL just outside the frame

Though watching a snake eating his snack might not be the “activity of choice” for everyone, the boys at the F.A.R.M. were busy making a snack of their own. During this session, our tomatoes have started turning ripe enough to harvest, so the boys have been picking the different varieties throughout the week. We have a mix of tomatoes varieties, including cherry tomatoes (small red ones), jubilee tomatoes (small yellow ones), better boy tomatoes (the classic red kind you’d put on your hamburger), Mr. Stripey tomatoes (large striped ones), and more. After harvesting enough to work with, the boys enjoyed preparing their own tomato sauce today at the F.A.R.M. 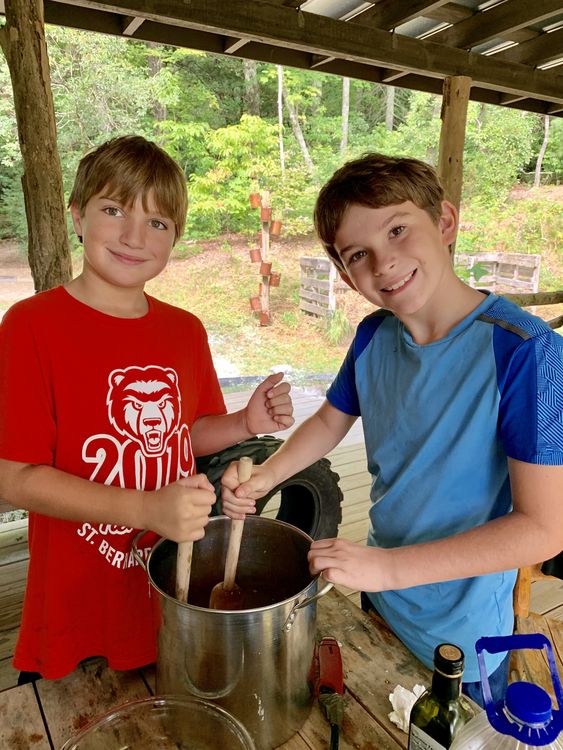 Preparing tomato sauce with the tomatoes they helped grow! 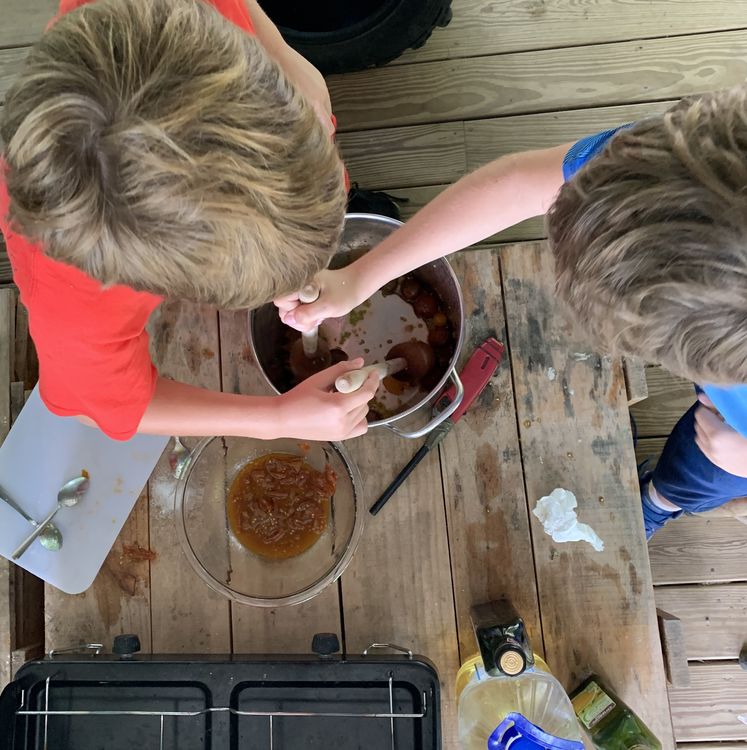 Now for the fun part: mashing the tomatoes!

They took turns smashing up the tomatoes in a bowl until they were like a paste. Then, campers added salt, olive oil, and a little water to the mixture for more flavor. Finally, they put the pot of tomato sauce on the stove, and waited for it to simmer and thicken. The smell of fresh tomatoes and simmering olive oil makes me hungry just thinking about it! While the sauce cooked, boys make “bannock bread” over the fire to dip in their homemade sauce. Bannock bread is a simple recipe for fried or roasted dough, perfect for making on a campout. The only ingredients are flour, water, and salt, which the boys mixed together to form a dough. Next, they wrapped the dough around sticks, and roasted it over the campfire. Though simple and easy to make, the bread is surprisingly tasty when cooked. The hardest part is having the patience for the dough to heat, and holding it far enough away from the fire that it doesn’t burn. 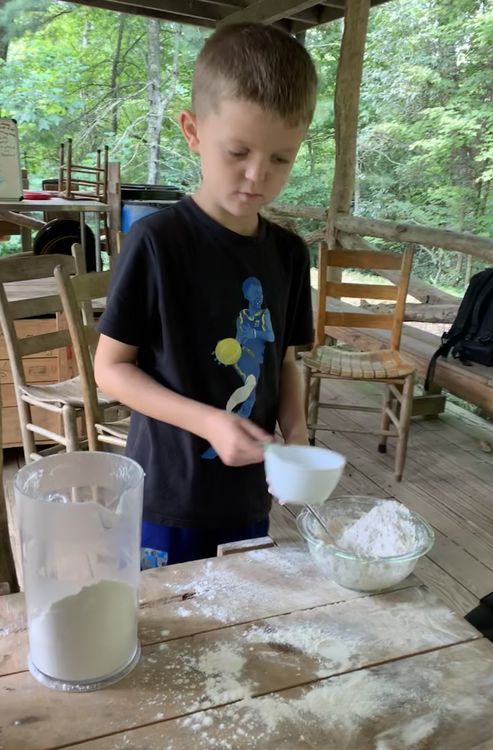 Once the boys had their camping-style bread, they dipped it in the homemade sauce. It’s already an enjoyable experience to cook your own food, but it’s even more special when the food you cook was also grown and cared for by your hands. Seeing the tomato plants go from flowered vines to bearing fruit is a neat experience, especially when you can then cook that into something more. Last week when the boys made pickles from the garden’s cucumbers, some of them didn’t realize that pickles were made from cucumbers! Many of our boys have never cooked before, grown food, or picked food straight from a garden to eat. It’s a cool learning experience to see a small glimpse of where food comes from. 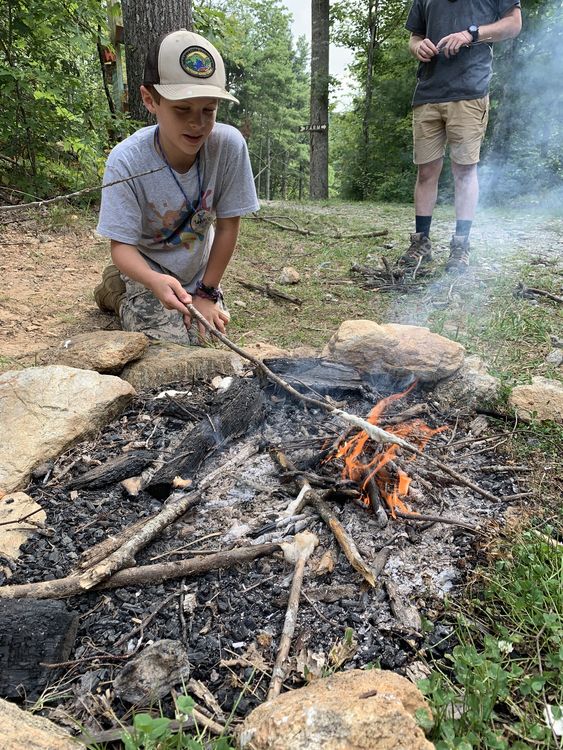 Tomorrow is already the final full day at camp, which is hard to believe. We’re looking forward to our final activities tomorrow morning, and I’m sure you can’t wait to hear all the stories from your sons on Friday!

More Highlights From This Wednesday: 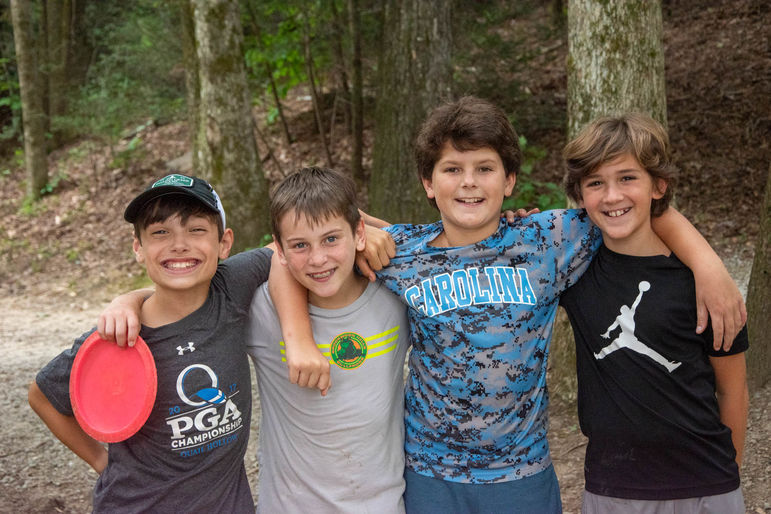