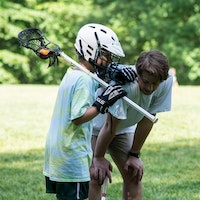 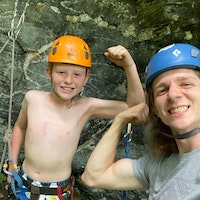 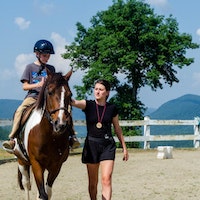 A role model is “a person looked to by others as an example to be imitated.” At camp, we’re lucky to have many role models, not just on staff, but among our campers as well. Camp is a place where you can be your best self, and based on what a handful of campers shared, it’s clear that we’re surrounded by some great people this summer.

Who are some examples of role models for campers? Since cabins live, eat, and play together every day, it may not be a surprise that many boys named their cabin counselors as someone they look up to. Drew’s role model is his counselor Shae, because “he’s patient and explains all our questions.” Drew likes how even-keeled Shae is. “It’s his first summer, and he’s doing a really good job!” Drew said. Pierce admires his cabin counselors Whit and Wodajo because they’re calm and collected. “They saved our cabin from a big spider,” he said. Bond’s role model is his cabin counselor Ford, “because he’s nice and funny in announcements.”

However, campers didn’t just name cabin counselors as role models - they admire staff in their activities as well. Weston says he looks up to paddling counselor Jake. “He’s really enthusiastic about everything,” Weston says. His energy makes Weston happy being around him. At the barn, just before David got ready to ride Blue on some trails, he named horseback riding staff member Jay as the person he looks up to. “I think Jay is a great role model because she’s independent,” he said. David was here last year and knew Jay then too, but thinks she has become more confident. He said he also wants to be independent and confident like that.

Even though we have amazing staff members working at camp this summer, the role models at camp aren’t limited to the counselors. Some boys named fellow campers as people they looked up to. Felix said that his older brother Alex was his role model. “He’s very good at ultimate frisbee and I’m encouraged to do it,” Alex said. Alex even made a custom Magic card featuring his brother as the character with good stats.

At the climbing wall, I asked a group of campers if they had any role models here at camp, and one of them pointed to Yancey, an older camper. This was a surprise to Yancey, who didn’t know the positive impact he’d had on his fellow campers. “He’s nice to younger campers,” they shared.

Not only do campers (and counselors) gain great role models at camp, but they also grow into role models themselves. The variety of the responses that campers gave reinforced the idea that role models come in all shapes and sizes. You never know who you’re impacting each day - let’s make our influence a positive one!

Summer Camp CounselorJune Camp2022
Back to the Blog