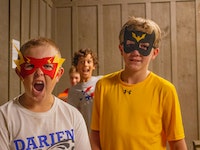 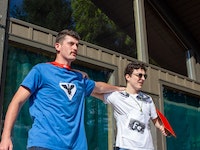 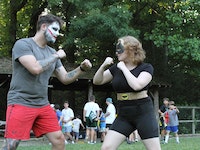 Every day at camp is super, but sometimes we get to celebrate superhero day!

On Wednesday morning, you could see capes and masks worn by campers and staff alike - everyone gets into the theme days here at camp. After breakfast when we gathered together on the front porch for Morning Assembly, Superman ran out in front of the crowd, followed by Ironman! Superman (Robinia’s Assistant Linehead, Alek) and Ironman (Sorrel’s Assistant Linehead, Harry) announced that they would need participants to help them settle the DC vs. Marvel debate. Hands of eager volunteers shot up, and those chosen were explained the task ahead: be the first person to pull out all the tissues from their tissue box one by one. The boys all laughed at the silliness of the assignment, and then sprang into action. After a frenzy of flying tissues, the DC team won!

This early game set the tone for later that evening, when everyone came together to play a Marvel vs DC all-camp-game for Evening Program! The six Infinity Stones (3 gold and 3 green) were lost at camp. As the Avengers rushed in to save the day, the Justice League decided to find them first to regain their original glory. 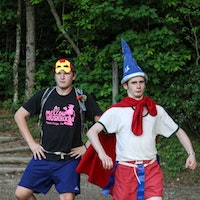 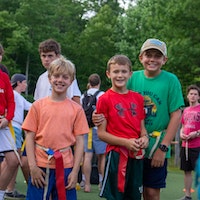 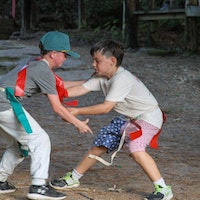 Campers and staff alike love the theme days, but superheroes actually do work at camp. I asked some campers whether they thought their counselors had any superpowers, and responses ranged from funny to serious. Apparently John from Cabin 22 is a “super snorer,” paddling head Max is “super boof man,” and CJ has “super hair.” James is the “silentenator,” which I’m told helps keep everyone calm and quiet in the cabin for Rest Hour.

Some superpowers were practical, like Whit’s “super sight” (which comes in handy for his photography around camp), riflery instructor Mike’s “super aim,” and pottery head Sunny’s “super art” skills. “If she was a superhero, anything she sculpted would turn into reality!” her pottery campers told me. Some superpowers came in handy during the Cabin Overnights, like Reid’s ability to build “super fires” and Harry’s “super chef” skills. “He cooked the best chicken on our overnight!” Cabin 7 told me. Both Adonis and Bryce got mentioned as counselors with “super strength!”

Other campers told me about superpowers their counselors had that were truly super. “Trevor brings people together,” his camper told me, “he has super teamwork skills.” “My counselor Eli could be a math teacher because he’s so smart,” said Smith. Peter was described by his campers as a “super motivator.”

Every counselor working at camp this summer has unique superpowers that they bring to the community every day. Thanks to them, we’re able to come together for a common purpose, learn new skills, and grow into our best selves. Here’s to another super day at camp!