Yesterday we not only enjoyed Pokemon Day, but were also treated to a special dinner made by our DASH crew! We began the day like normal, gathering at Morning Watch. However, after Sam Feingold shared the message for the day, we heard the Pokemon theme song playing throughout camp from the Gym speakers, setting the scene as we headed to breakfast! We were gathered on the front porch for Morning Assembly after eating, when Ash Ketchem ran out, ready to become a trainer! John Nowicki played a great Ash, joined by Zach Rivera as Pikachu (or Zachachu!).

During the Morning Assembly skit, Ash and Pikachu came across a wild Metapod and Magicarp, which were quickly defeated by Pikachu’s electric talents. They tried to capture more Pokemon with the pokeballs, but were suddenly foiled by the arrival of Team Rocket: Jessie, James, and Meowth!

Later that day we would continue the Pokemon theme by playing PokeCounselor Hunt, but another huge highlight of yesterday was the dinner that was prepared specially by our DASH crew. 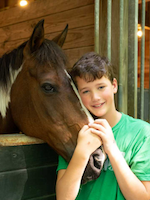 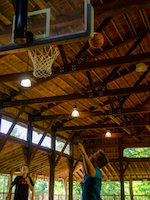 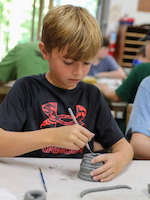 DASH are the staff members who are in the “dash” between their camper and counselor years, and work for 5 weeks during the summer in a mix of kitchen and activity staff roles. It’s a great transitional summer for former campers to gain counselor experience, get paid, and learn about camp “behind the scenes” before returning the following year for their first full summer on staff. During this first half of the summer, we’ve had 5 great DASH guys - Mace Hood, Walter Miller, Hayes Orr, James Singhal, and Jack Thomas. This Sunday, they’ll be leaving already, and we’ll be gaining the next group of DASH for the summer. However, before they leave, they wanted to give a gift to the camp community.

The DASH guys serve shifts in the kitchen between helping teach activities, and they wanted to make a special meal for the camp community. Last night we were treated to an amazing dinner, led by James as the “honorary chef” for the group. Before diving into the delicious meal, James and the rest of the DASH crew introduced each dish at the front of the Dining Hall.

“I wanted to make a dinner that sometimes I eat at home, and part of my family is Indian so I wanted to make an Indian meal,” James shared. “We chose the main star of the meal to be Chicken Tikka Masala, though it’s not technically an Indian meal since it’s British too - that’s where the Masala part came from. Then we have rice on the side - rice is a big staple - so if you like rice, go ahead and put rice down and then the chicken on top. For the bread we have naan pieces, and inside that bread basket you’ll find some curried eggplant to put on the naan. Lastly we have okra fries, which are sliced and roasted in the oven - my own recipe.”

The DASH dinner was one of the most popular meals we’ve served in the dining hall yet, with boys cleaning their plates and enjoying seconds and thirds. Listening to conversations around the tables, you could hear happy exclamations from both counselors and campers about how delicious everything was. We’re so thankful the DASH crew wanted to share their cooking skills with us, and grateful that James was willing to share a meal that was meaningful to him personally!

The DASH guys presenting their meal to camp in the Dining Hall, with Mitch (their staff mentor) in the center.

After dinner, the excitement wasn’t over yet - it was still Pokemon Day after all! From the Dining Hall, we dismissed straight into the PokeCounselor Hunt, where campers tried to “catch ‘em all”! Each counselor was a Pokemon hidden around camp, with their own custom Pokemon cards. Campers (trainers!) had to find and catch the PokeCounselors to earn points for their teams, all while trying to evade Team Rocket (our Men of STEEL!) who were roaming camp trying to steal PokeCounselor collections and pull campers flag belts! If someone from Team Rocket pulled a camper’s flag belt, it would be turned in for negative points towards that team. Finding PokeCounselor cards is how campers gained points back.

Each PokeCounselor card described their unique stats. “Legendary” PokeCounselors were worth more than “Rare” ones, and “Mythical” PokeCounselors could run when spotted! Mythical PokeCounselors were marked by gold flagging tape and a gold belt. To capture them, campers had to pull their flag belt. Campers who were up for an extra challenge could attempt to find David Echeverria, the only PokeCounselor with a “Shiny UltraRare” status! Even boys who had never watched or played pokemon before had a blast! 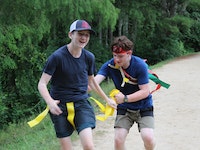 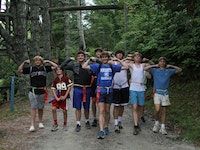 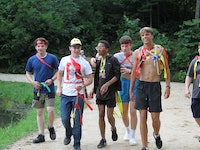 Theme DaysMain Camp2022
Back to the Blog